A Night of Classical Veena

The continuation of the Zeroclassikal performance series showcased yet another talented individual take us through the history of his instrument and of Carnatic music whilst reflecting on his own journey here in Britain. 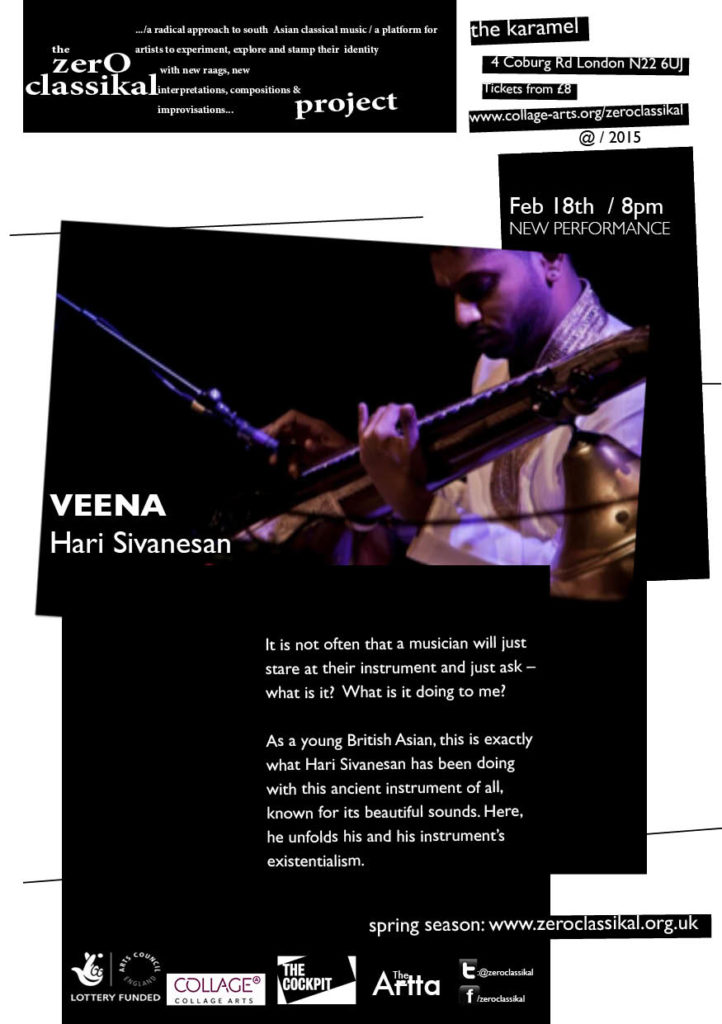 Hari Sivanesan began the concert talking about the Veena itself, from its creation to its development. With the first half hour consisting of pure classical music, we were taken through the true beauty of the instrument beginning with the majestic Raga Nalinakanthi followed by the Veena’s most treasured type of improvisation; Thanam, in a Ragamalika (variety of scales). This was followed by a beautiful composition, Ranjanimala, ending with an intricately expert Thani (solo) by Pirashanna, the percussionist for the evening. Hari spoke about how the Veena, in scriptures, is described as one of the closest instruments to the voice and he really showed its capabilities through his astounding gamakas.

The night then took a twist when they were joined on stage by Fram, the Keyboard, Harmonium and Pads player for the night! They played the beautiful Akilandeshawari in Raga Dwijavanthi which left the whole audience in a trance before it was broken by the interval and everyone’s rush to the bar to get a drink! The second half was lighter when Daren joined on stage playing Guitar. Hari not only showed off his skills playing Veena but also his voice and together the team on stage took us on their own personal journey focusing on their own meaning of spirituality which resonated through the audience. A very profound thought Hari spoke about was how sometimes with the learning of Classical music, at some point the art stops being an art but rather becomes a science and sometimes we have to just remember to just let it be. Here you could see the guys really believed in what they were performing with the audience swaying to rhythm!

Overall, at the Zeroclassikal project we’re always eager to learn more and for those who had no idea what a Veena was or any of it’s qualities this was the perfect way to learn and hear beautiful music along with it!

Next month we bring Saxophonist, Jesse Bannister to the stage to show off his knowledge of Hindustani music!