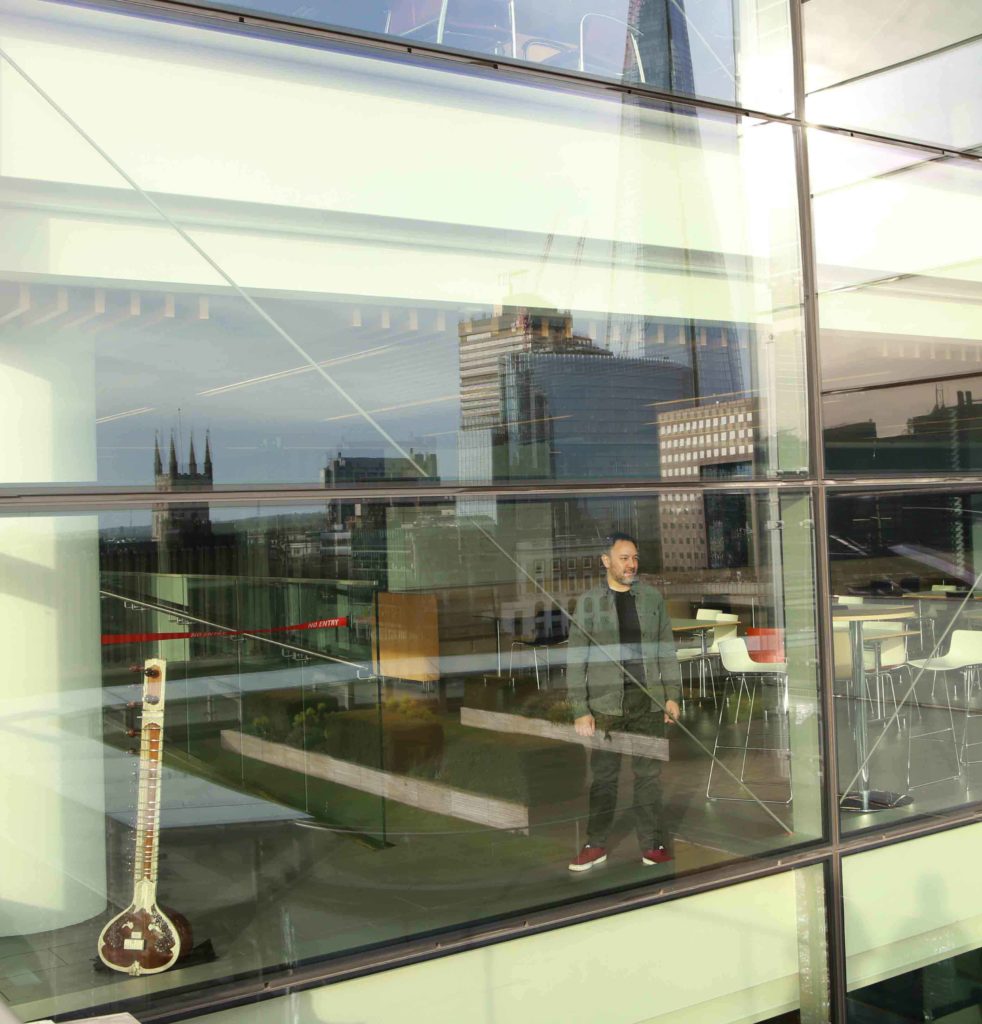 Imagine a reprise of jazz chord, a western classical structure & harmony, then an alaap scale of a raag… but all within a single thought.  You may be forgiven to shout that can only be contrived.  But, that is exactly what Jonathan Mayer’s musical brain computes on a daily basis..

Highly regarded for his resilient talent, consistency and respect for his form  –  you can see him workshoping in a school and gracing the southbank orchestra pit with the same enthusiasm –  Jonathan despite having played with Sir Paul McCartney and London Philharmonic Orchestra, has remained lesser known to the ICM sector, but that is all changing  as he nears the end of his Altered Boundaries tour and getting ready  to release a series of recordings..

When do you remember plucking the sitar strings for the first time and why the sitar?

It was back in 1991, I had just finished my GCSEs and was on holiday in Turkey with my parents, having a small glass of beer with my dad and talking about music. At that point I had no intention of becoming a musician, and it was listening to his Indo-jazz Fusions recordings from the 60’s while there and it was his recording of Dhammapada that got me hooked on the true beauty of the sitar. We had family friends coming over from Kolkata, so I asked if they could pick up a sitar for me. I started lessons with Clem Alford and it just kind of progressed from there.

Is it something you carried to school, like how did you negotiate school music with what was happening at home?

I never played the sitar in school. I remember one of my teachers’ saying, “you know you can’t take that music seriously, make sure you concentrate on western classical”. I’m glad I didn’t listen to him. But I did carry my sitar to school just once for my A level Music performance. My school was in North London, very multicultural – nobody ever saw it as a clash of cultures or anything out of the ordinary.

Music at home was not what people might think for me. Many might think that a musician’s home is always filled with music and that it carries through the house all day. Both my parents were professional musicians and so if they were surrounded by music all day the last thing you want to do is play or listen to more music in the evening. My father used to compose up until 7pm and my mother would teach until then, after that they would eat and watch TV. That down time is important for everyone.

Did you get teased for carrying on with sitar? Or did it give some mojo to you – the yourself – your identity?

Nope, never. I sort of ‘fell’ in to playing the sitar; after playing for two years I played it for my A level exam because I was becoming better at it than violin and piano. It was something I enjoyed doing, and I never really thought about identity until much later on when I reflected on the idea of being half Indian. I also didn’t really see it as a creative or emotional vehicle until I was in my twenties.

Your father was a prominent music composer with heritage from the Calcutta music scene, do you have any memories of that or did he share that scene?

He left Calcutta in 1952 after winning a competition to study at The Royal Academy in London so I personally have no memories of his time there. He talked about playing violin at the Lighthouse cinema for the guests and getting to watch the latest films for free. He also talked about the Hindu/Muslim riots in the 1940s and seeing dead bodies in the road and to be honest I think we were glad to leave India as he knew if he wanted to be a composer and violinist – it wouldn’t happen there. I have been to Kolkatta many times and I enjoy roaming around Chandhi Chowk where my father grew up, maybe because of that I do have a strong bond with Kolkatta and enjoy playing there – but it has changed so much from his days. 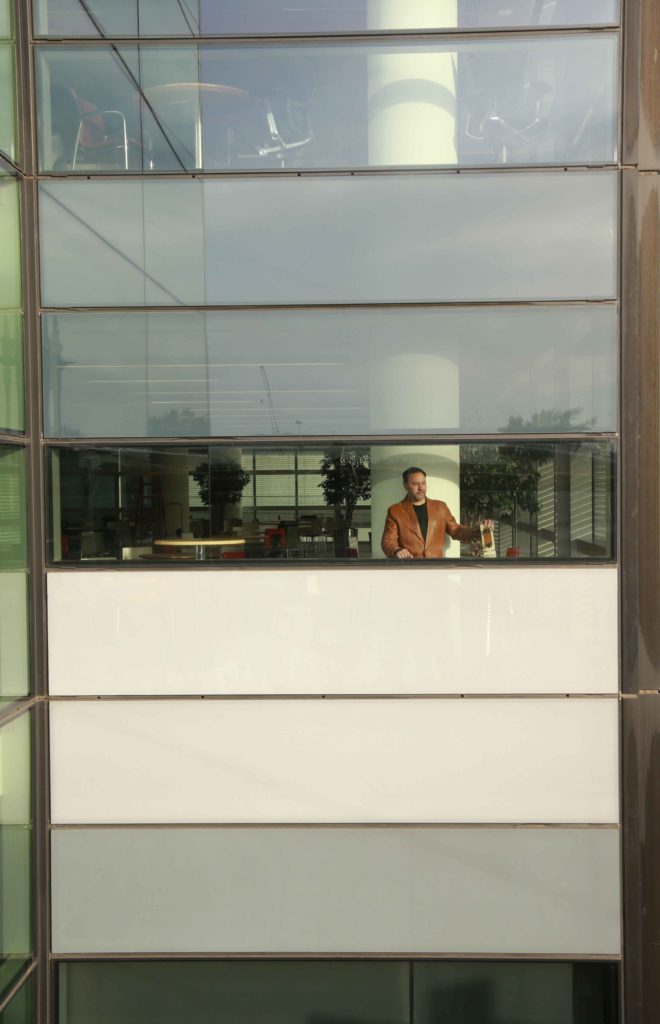 You studied at Birmingham Conservatoire focusing on composition  – how was that? Was it seen as all exotic scoring for the sitar?

When I started at The Birmingham Conservatoire I was studying composition with Andrew Downes, I must also add that I was studying composition from my father from the age of 17, he taught orchestration. Downes was fantastic at extracting inspiration and creativity out of musicians and it was he who suggested that I write a sitar concerto. It wasn’t really seen as exotic because the Conservatoire was so diverse back in the 90s, it had a great world music department under Mark Lockett. I did experiment more with Jazz & Rock through those years.

Since I left, in 1997, it has changed a lot, for one they have a new building and have rebranded themselves as The Royal Birmingham Conservatoire. Unfortunately, as far as I know, they no longer have a large world music department and now concentrate on western classical.

I remember one of my teachers’ saying, “you know you can’t take that music seriously, make sure you concentrate on western classical”. I’m glad I didn’t listen to him.

Most people in UK only experience the sound of sitar when in an Indian restaurant, that is if they are not playing Bollywood music – how do you encounter that stereotype?

Exposure is what can dissolve this stereotype. When I play to a UK/European audience who haven’t really experienced Indian Classical music I always give a performance demonstration unless they specifically ask for straight concert. This is because when people understand what we are playing they enjoy it far more than if I kept my head down and played alaap for 45 minutes.

What were your first professional jobs?

Greenwich 1993 playing my father’s Shanta Quintet for Sitar and String Quartet… no pressure!!

Wow! Looking back – how are you father’s compositions different to the new sitar/string work being made right now?

I learnt a lot from my father’s compositions, as his writing was methodical and intuitive. Everything was notated and that way he had control over his ideas and execution. I believe that is one of the changes that we see less of nowadays.

You are one of the most prolific ICM musicians around with a number of radical compositions – but somehow the ICM patronage at large have not encountered your music – how do you reconcile with that?  Is there more that the music promoters and producers should be doing to support UK based musicianship?

It’s probably my own fault. I’m rubbish at social media, networking etc… However, I do feel that if I just keep doing what I do, things will happen. I always knew a musician’s career should be a slow burner, you don’t want to peak too early, and it has taken me 20 years to evolve my style of playing, composition and identity. The last five years have been exciting with a very healthy balance of playing and composition from playing at The Dover Lane Music Conference in Kolkata to having my orchestral workings performed at The Royal Festival Hall by The LPO. I have also been doing much work more abroad and especially in the Czech Republic where I have played with many of their orchestras and have been commissioned to write works for them. This year 2020 will be exciting with a new CD coming out with mine and my father’s orchestral compositions performed by The BBC National Orchestra of Wales and released on First Hand Records.

Being part of The Orlando Consort, collaborated with The London Philharmonic Orchestra and delivering many commission in the Czech Republic. What has been the proudest moment in your music so far in relation to new music?

I never feel proud of my music, I am forever self doubting myself but I am happy with Altered Boundaries, My Second Sitar Concerto and my arrangements of the Bach solo violin sonatas.

How did Altered Boundaries come about? Are you happy with what you realised with it?

I have always wanted to create an Indian string quartet. I was really happy with the end result and every time we play it we become more comfortable with the idea of playing as an ensemble. North Indian classical music is fundamentally solo-istic and so bringing four solo musicians together and playing what is written is the challenge.

I never feel proud of my music. I am forever self doubting myself but I am really happy with Altered Boundaries.

Where do you see yourself going with the classical genre?

I love playing Indian classical, it is where I feel the most liberated. Although the guidelines are strict, the boundaries are endless in terms of creative development. I enjoy the playfulness on stage between musicians, which you tend to miss nowadays. I feel it is becoming too serious because in essence music is a form of expression and raag is a journey for the audience – which you must lead. 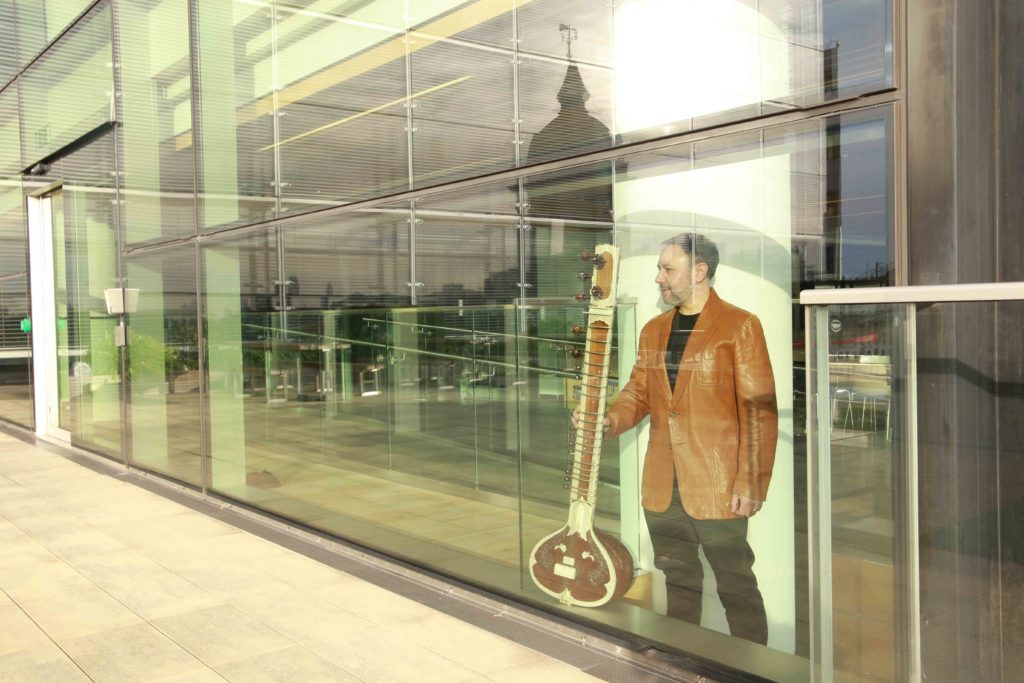 There are some who are observing that in some British south Asian sectors, Indian or correctly naming it as south Asian classical music is the new rock n’roll – meaning that its interest and role is against the establishment of what young people are expected to play or listen to?  Do you see that too?

There has been a recent influx of younger people getting in to Indian classical music and I have seen a sharp increase since when I started in 1991. Back then there was still the ‘hippy’ hangover and a few community based music groups but nothing on the scale we see now in the UK. I think there are a few reasons for this and firstly the 2nd/3rd generation British Asians had to find their own identity, where some went into Bhangra and more mainstream genres. Many decided to go back to their roots and study Indian Classical. They took the form and made it their own to create the thriving Asian music community we have today in the UK. Secondly the snowball effect. This thriving community reached out to the wider community to create festivals, events and workshops and that in effect raised awareness of ICM and create a larger audience. I hope this identity develops to create a very distinctive musical voice here in the UK.

BBC CD release this year and then I’m not sure. Would like to work with a smaller ensemble of western musicians, but whatever I do it will always be a blend of western and Indian music. Those are the two genres I have studied intensely and it is my ethnic makeup.