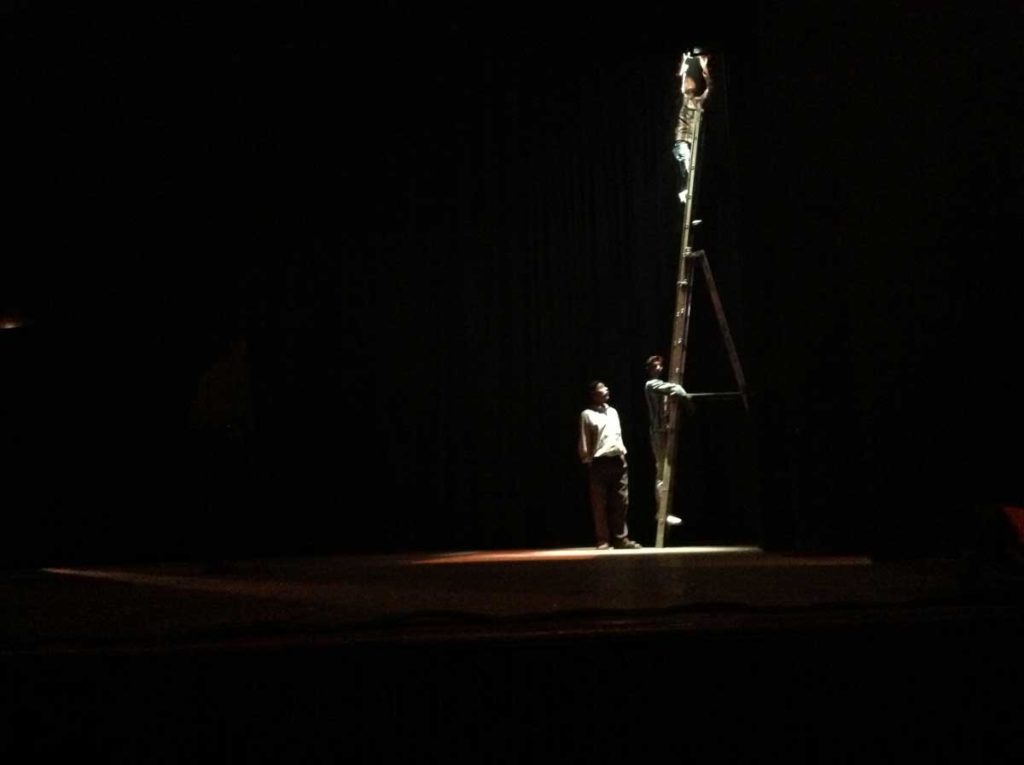 She came to dance. She arrived on a dusty dusk, the car ride from the airport went over and into potholes scaterred around serious road construction sites that never really ended, but just morphed into one another. She prodded her four year old – “Look, Bob the builder diggers”, pointing to the construction vehicles. His eyes wondered for the bright colours of his toys, but these were all brazenly blended with the dust and dirt, so he was unfazed. The hired car, an older Ambassador beige model, was humid – it was hot outside and you expected air conditioning. She kept using her muslin scarf alternating to wipe hers and her son’s sweaty forehead, brow, neck, anything that was exposed to the humidity.

In the interim of those emotions of expectation, of arrival, of where you are going to end up: of what accommodation, what hospitality, she asked her host who was to be one of her musicians, –‘What is the stage like? Does it have a dance floor? Or floor boards? Hope it isn’’t concrete?”. The musician noted the priority of dance floors instead of the state o the rooms she would be staying.

“No, no not concrete” he answered and evasiv-ed the question in the most Indian way as possible that the floor was going to be ‘okay”, without giving detail. He hadn’t actually thought or inquired about the floor and now seemed alarmed as it was so fundamental, so important to the whole project he was about to take on – What if the floor was concrete? But then the theatre had had dance performances there before, so felt relieved at that thought.

They did arrive, finally, as they would, were to – two hours after leaving the airport; a journey of just 12 trafficked miles. It was well into evening, Kolatta was buzzing with neons in competition with white tubular lights, blinding the detail through the faze of a settled polluted evening.

The arrival at was a tall building, with broken concrete, peeled paint and leaking supply water pipes, and air conditioning units sticking out as sore pimples; their presence somehow did not strike out different, the condition was no different to the next building in the block and in fact the entire block, street – as if it was almost a municipal requirement or design feature that you had to have leaking plumbing and dirty cracked concrete. Had it been a set for one xxxxx films, foreshadowing some dystopian time ahead of this?

The building was modern, post independence modern, unlike the stead crumbling colonial buildings the British left behind, that some called a blemish on their city, a city ghost –a feature she loved about the city, the fact that it was just around the corner from the old Chowringee Lane, she will want to visit no 36, she had seen the film, So, she fekt disappointed that the building wasn’t of that artitecture, instead it was of the Tata Tower ilk, also around the corner, that caught the nation’s futurism, when after unshackling 200 years of British colonial rule India still turned to the west for its grand design – for Corbusier to design Chandigarh,

She knew her building wasn’t a hotel, the musician’s budget couldn’t stretch to booking one with a bathroom attached, the only ‘rider’ she had asked; instead it was a self-contained apartment, with a cook servant. “It’s on the ninth floor’ as DM led the way into the elevator.

Immediately she felt unsafe; the urine lined corners were just a distraction to the creaky soundscape of the elevator lifting and climbing up onto the floors above, stopping at each one where a traffic of people boarded or disembarked into what could only be a 8ft square cubicle, and together they shifted and shoved each other to balance the floor. She looked for the signage of permissible weight – but it seemed screwed out of the wall. She regretted immediately for accepting the reccomendation of a friend, who had stayed there on a previous tour of a show – a friend who was so frugal that he once had announced a 2 * hotel was height of luxury for him. She smiled, she was fond of him, but shouldn’t have listened to him nevertheless. She smiled also when her son reached out to a passenger pulled into the elevator – a four legged passenger – a goat!

The journey to the 9th floor mirrored the taxi ride, it had its own pot- holes, humidity, sweat and smell; this time her boy was paying attention to what was around him – to a trick of closing the door, it had to be connected at a certain angle, and then forced at a certain speed to hit the connectors before the circuits responded to the buttons pressed. . You obviously needed to have done it on many previous occasions to master its commands and for that there seemed a good proportion of passengers of that mastery. And it wasn’t always responding to that set of skills – around the sixth floor it became stubborn to any responses and only colluded when couple of the passengers left for the stairs.

The apartment was spacious, surprisingly, modern, sixties modern, kept well with G plan replica furnitures. What became surprising to her was that that there were four other rooms, each with it own guests, opening to a living/dining room, it wasn’t exclusive as she had been led to believe, An adolescent, he must have been 16 or 17, greeted them with a big beaming smile aiming more at her boy. His first question was whether she wanted a cup of tea. Caffeine got in the way of her sleep and with a jet lag in her muscles – she declined. The he asked her and her boy’s preference for for breakfast. She wasn’t bothered – but her boy must be kept away from any sweet cereals , – ‘a toast would do’.

She noticed the Musician twitching to and asked him about rehearsal next day. “ Morning” he replied.

“I will come and pick you”

“It is okay, I can meet you there”

You will have a problem finding . It is diffcult.

A taxi will know”