Kobini Ananth and Yarlinie Thanabalasingham have been working on a project that has never been done before, so basically they are having to write ta new set of rules 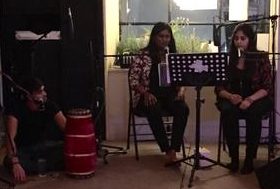 Our good friend Mithila messaged us a while back now introducing us to Zeroclassikal, a project at the time we thought was quite unusual, where the rules of Carnatic music would be questioned. Immediately we thought of harmonies, predominantly a Western concept which we were exposed through listening to Western Classical music, everyday radio and even soundtracks to films, and applying these to the context of Carnatic music. Being British-Born Carnatic vocalists, this idea appealed to us, as both styles of music have influenced us from a very young age. However, although the idea excited us, we found ourselves quite overwhelmed as it meant breaking the rules of an ancient art form. So as we’ve been working on this, we thought it was time for a little update on our progress!

We didn’t quite know where to begin. Having not been taught harmonies, (as it is not part of any classical training), we decided perhaps we should take it to the basics and start with a very famous Carnatic composition, Vathapi, and directly transpose notes to make a new harmony. However, even here we realised the future obstacles that lay ahead of us. Not only will we need to be clever with our harmonies but also think of pitch, even half an octave makes all the difference and with our vocal ranges, it can be difficult to pursue a harmony as we had originally imagined. Therefore we’ve started to change the pitch for each song just to make it more effective. This isn’t typically done in a Carnatic concert and our Miruthangam accompaniment isn’t going to be pleased when we tell him we need more than one Miruthangam!

As we started to understand the basics of harmony, it was time to attempt something more difficult and just to be more adventurous we decided to jump directly into the deep end! We’ve picked a few compositions by a great Carnatic musician and composer, Lalgudi.G.Jayaraman, whom has inspired us with the incredible thought behind each of his compositions and the way he interprets raga into emotion. With these, we were quite hesitant, as his pieces are very intricate. However, as we began, we found some aspects not as challenging as we thought. His thought in exposing ragas through emotions meant that from a harmonic point of view, we had a clear direction in the kinds of harmony we should be looking to add depending on the mood of the composition, and this has been quite fun!

We have had many questions from the beginning as to whether this will work, such as how can we sing complicated gamakams and still harmonise, what if we change the essence of the composition? Yet these are all things we’re slowly working on and it’s great to see the scope there is for harmonies within Carnatic music. We’ve also suddenly found whilst practicing these pieces together, that a lot more concentration and understanding of each other is required as it’s not easy singing one thing whilst the person next to you is doing something completely different! A few weeks to go now to perfect this and its time to get the percussion involved and see what we can come up with! In the meantime, please spread the word, Karamel Lounge on 19th November – see you guys all there!

After months of hard work, Yarlinie and Kobini finally came together with their percussionist, Thushan last week at the Karamel Club to perform ‘An Inner Voice’. Showcasing a collection of Carnatic pieces they had worked on, both Yarlinie and Kobini, through story-telling, took the audience through their journey of introduction to harmonies in Carnatic music. The first question was would it even work? However by the end there was no doubt that it would and the potential and scope there is for this experiment was clearly portrayed. As this concert was simply to showcase a work in progress, it was clear from the onset that this would lead to be a successful project. They went from exploring harmonies in terms of a simple transposition, to essentially creating new melody lines that were used to enhance the nature of the pieces. They looked into various subjects such as spiritual music and its current use of harmony; using different ragas together to create new harmonies and each concept was intelligently illustrated. Feedback from the audience certainly suggested that there is certainly great potential for this project to develop further.

So next in line is to create a whole piece of work which will come as a result to what they have been experimenting with so far and the Zeroclassikal project is certainly excited to hear it!

Here are a few words from the girls when interviewed about their experience so far:

How do you feel the concert went last week?
We felt it went very well. This was a fantastic learning experience and we enjoyed the journey.

What were you trying to achieve and how far did you think you succeeded? Our main aim was to explore different concepts of harmonies within Carnatic Music such as direct transposition of notes, changing the raga of a harmony from the raga of the composition and exploring how harmonies can make a mantra feel more spiritual. For a first attempt, we feel that we had done more than we expected.

What were the difficulties?
One of the difficulties we faced was singing different notes at the same time. This was the first time we had attempted to sing harmonies for a full concert and we found it a challenge to concentrate whilst the other one of us is singing something different.  Also, we found it difficult to sing at our usual pitch; this was particularly for a piece where we decided to directly transpose the harmonies 3 notes upwards. During rehearsals, we had to bring the pitch down and also weren’t able to fully transpose some lines due to the harmony being extremely high.

How did you find the venue?
The venue was great, it was very intimate and had a great atmosphere.

What was the feedback/reaction from your gurus?
Our guru fully supported us and she was very impressed with the range of concepts we had covered.

Where from here?
In the future, we would like to explore how adding harmonies can enhance an emotion that a certain raga creates. Also, we would like to learn more about the theory of Western Classical harmonies and apply it to Carnatic Music with more of a structure than we have done so.